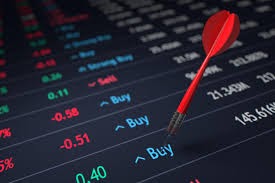 Right now is one of the most volatile times the stock market has ever seen. Obviously, the political stress of an election, and a new president entering office causes for changes in the market, but this combined with the Covid-19 pandemic, the unemployment and social strains that followed and the influx of Robinhood day traders has caused the market to be as unpredictable as ever.

Traditionally, investing has been done through large firms who control large mutual funds or hedge funds, and there has been a need for a middle man between the average person and buying stock, but through a fairly new app, Robinhood, and other investing apps, people have been able to invest directly through the app themselves, with any sum of money. This has opened the door to more investors than the market has ever seen, and for average people to collectively have more say in the market’s fluctuations than ever before.

GameStop is a company that has stores where people go to buy and sell video games, which for my generation and those older than me was great because it was a place to find all the games anyone could need, but as the internet became more prominent, buying games online became possible and popular, leading to GameStop’s business to be obsolete.

Because of this, GameStop’s stock was not very high and did not seem to have any possible future growth. Andrew Left, a stock researcher, publicly advocated for investors to “short” the stock, meaning that you gain money when the stock goes down. Fund managers took this advice and shorted the stock, but a large group of people on Reddit, heard a company that they grew up loving being shorted and rallied together to buy the stock and drive the price up.

This mass amount of people investing in GameStop through Robinhood and trading apps led to the stock to skyrocket, and the people that shorted the stock not only lost money but to get out of a short position, they had to buy more of the stock, which raised the price even higher. Because the GameStop surged so much, hedge funds that shorted the stock, the Wall Street big hedge funds were losing billions of dollars, and Robinhood eventually shut down the trading of the stock, citing that they were protecting their investors.

Robinhood did this so the hedge funds did not lose any more money, and their actions plummeted the GameStop stock, allowing the hedge funds to minimize their losses. Robinhood’s actions have infuriated the country with both political parties demanding investigation and the Robinhood reviews plummeting with an influx of 1 star ratings and bad comments.

Legal action could be coming soon, but the GameStop stock surge was something that Wall Street has never seen before and may never see again.