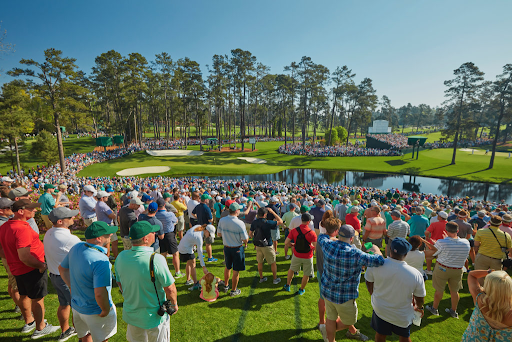 The buildup to this year’s Masters was very exciting. Golfing legend and all time great, Tiger Woods, announced he was returning to the Masters. This sent a jolt of excitement throughout not just the nation, but the world. Woods had made what seemed to be impossible possible. After more than a year of hard work, patience and faith, Woods was back. Nobody knew if they’d ever see the legend play competitively again; Tiger didn’t care, he zoned out the outside noise and blocked out all of the doubters in his way.

Masters’ Thursday had finally come, but there were concerns as to if the weather would hold off. Miraculously the storm moved away and the sun was shining; it was time. With an absolutely massive crowd following Tiger, he managed to post a score of 71 (-1), putting him four back from the lead. With Woods appearing to be back in the mix, the crowd only got larger the next day. Woods started struggling early in his Friday round but managed to play with some grit and finish with a posted score of 73 (+1). Still not totally out of the mix, Woods walked onto the first tee Saturday still full of confidence, sadly, this confidence would not last posting a saturday round of 78 (+6). With the Woods craze fading out, the focus was back on world best Scottie Scheffler who held a close lead over the Aussie, Cam Smith.

It was finally Masters Sunday, and many familiar names stood atop the leaderboard including: Scheffler, Smith, Sungjae Im, Charl Schwartzel and Shane Lowry, with Collin Morikawa, Corey Conners and defending champion, Hideki Matsuyama, shortly behind. Scheffler had a comfortable lead, so he played smart golf. Good decisions were made between him and his caddie, Ted Scott, which resulted in a final round of 71 (-1), after four putting on the final hole. This was seemingly enough; Scottie had won by three strokes. Showing great effort, Rory McIlroy managed to shoot 64 (-8) his final round to make a run at completing his Grand Slam in Augusta. However, he finished (-7) and in second place.

As always, the Masters never disappoints, and only seems to become more and more entertaining every year. After weeks of preparation for this tournament, Scheffler, continued his hot streak and will remain the highest ranked golfer in the world. Only now he has a green jacket.